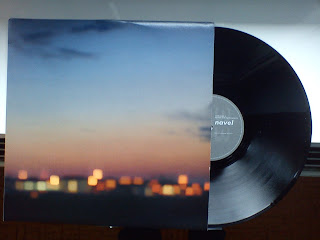 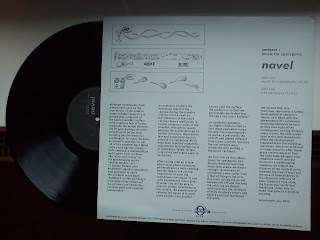 The Stuttgart ambient duo Navel created a tribute album to Brian Eno’s seminal Ambient 1: Music for Airports from 1978. But they don’t limit themselves to a cheap re-enacment of Eno’s ideas. It is more of a tribute to a tribute: after all, Eno was immensely influenced by German kosmische musik in the 1970’s. It was his work with Cluster and Harmonia that ultimately led to the creation of the Ambient series and the conceptual foundations of the genre “ambient”. Side A of the vinyl is entitled “Music for Spaceports” and is an obvious reference to “1/1” off Eno’s Music for Airports LP. The sound here is much richer, and unlike Brian’s original, it is based almost entirely on processed guitar sounds, as opposed to processed piano section on “1/1”. The sound is much richer and filled with various textures – unlike Eno’s track, which was raw and consisted only of piano note intervals, the sound of “Music for Airports” is filled with drones and trademark note intervals, which are sparse and tasteful.
What distinguishes this album is how German it sounds – it is truly a tribute, from Germans, to Germans (and a Brit inspired by Germans). The artwork and the titles are filled to references to kosmische musik and ambient pioneers. The cover photo may or not be a nod to the Begegnungen series by Eno, Moebius, Roedelius & Plank. The pictures at the back are obvious tips of the hat to the mysterious diagrams of Eno’s Music for Airports. Side B, entitled “Très Cosmique” refers to Harmonia’s „Sehr Kosmisch” off their Musik von Harmonia LP. Despite the Harmonia reference, the track harkens back to Ash Ra Tempel’s 1975 Le Berceau de Cristal. Blissful, slowly pulsing, string-like synths envelop the listener in a beautiful, although barely noticeable melody accentuated by slow and minimalist guitar playing.
Navel have created a beautiful tribute to their German ancestors and teachers. The duo took 30 years of development of the genre and added modern production techniques to produce two sides of progressive, relaxing ride on waves of the cosmic ocean. Let’s hope we live to the times when actual spaceports will be built and this album will be rediscovered and played while waiting for the next rocket to Mars.
The LP can be bought at the Taping Desk's website.
You can download the album at UAXUCTUM.
Posted by Unknown at 7:35 PM

This is a really cool relax sound.
Thank you!