SYV are a rock group from Norway that came into being in the late 90s. Their music can be described simply as krauty motorik psych. In their own words: SYV's music could be described as weird and unexplained, sort of disconnected yet totally tuned in, laidback but sharp and quite bizarre in places. Fans of Circle will probably enjoy this a lot. Check out their Myspace page, too.

Problems That Fix Themselves - Seconds

Problems That Fix Themselves is a moniker of Chicago, IL based musician Joshua Tabbia. "Seconds" is an eclectic collection of pastoral drones, sudden outbursts of (almost harsh) noise and driving electronic beats. The album is also available in a cassette form on Already Dead Tapes label. Also, make sure to visit Joshua's page. 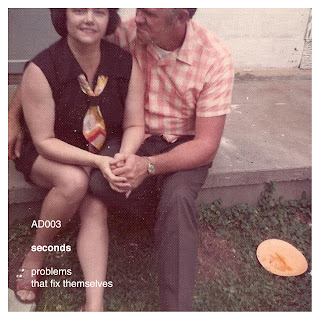 Josh Down is a saxophone player/electronic composer hailing from Cambridge, England. His music ranges from relaxing, meditative saxophone improvisations, field recording filled soundscapes not unlike those of Ariel Kalma, spacious ambient, ominous and bass-heavy drones, even attempts at machine music with algorhitms inspired by the work of late John Cage. Highly recommended, this dude deserves recognition.

Posted by Unknown at 8:35 PM No comments:

Ibiis Rooge is Neil Campbell (aka Astral Social Club) and High Wolf. The resulting collaboration is a collection of drooooning, sunlit, glitchy electronics with an occasional pulsing, dancey side provided by Mr. Campbell. Ibiis Rooge released two albums so far: "Pink Hybrid" on Winged Sun in 2009 and "Iibis Rooge" on Dekorder in 2010. 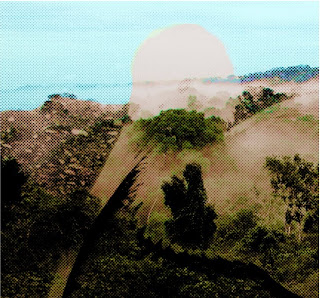 Rarely do I write about bands from my country, and maybe it is about time I should change that (if I recall correctly, there is only one album from Poland posted on this blog - it's "SunDro" by Kości, by the way - and that was over 2 years ago). Same Road is a three piece band from Koszalin, Poland. The guys play purely instrumental minimalistic post-rock/noise rock reminiscent of mid-90s Midwest bands with hints of psychedelia. In terms of similarity, I see them as successors/followers of legendary Słupsk group Ewa Braun - one of the best bands in history of Polish music, whom I shall post very soon. Same Road have their own blog and give free download links for their three albums. 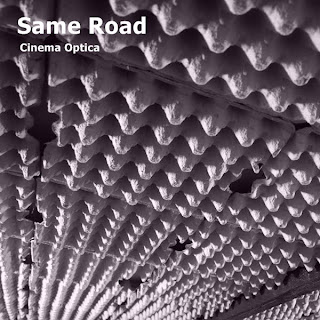 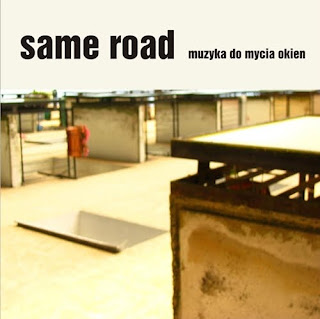 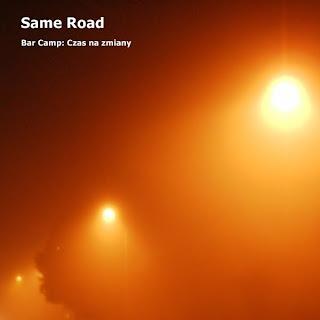 Posted by Unknown at 6:19 PM No comments: 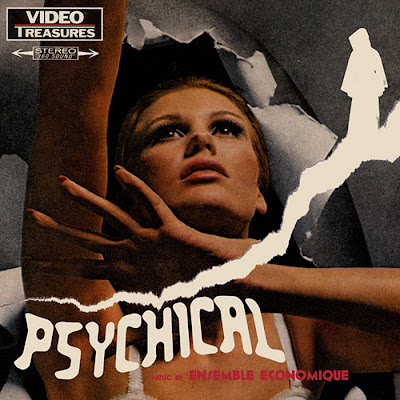 Brian Pyle's (1/2 of NorCal improv/experimental unit Starving Weirdos) Ensemble Economique project is like the polar opposite of SoCal's Sun Araw: while Cameron's music is the epitome of tropical bliss and relaxed meditative high on the beach, Ensemble Economique is like a bad trip somewhere in the tropics, like stumbling straight into a voodoo ceremony while being high as a kite: things may seem like a joke at first but it stops being funny very quickly and suddenly you're terrified and you want to run away. But you can't.
"Psychical", the newest record from EE, released on LA imprint Not Not Fun, offers eight unsettling ritualistic soundscapes reminiscent (both visually and musically) of old, cheesy horror movie. It's like remembering fragments from a movie where the guy is given a mysterious mixture and buried alive somewhere in Haiti, but you can't remember the name of the film or the actors. Heavy synth drones coexist with looped exotic drums, and occasional psychedelic guitar freakouts add yet more layers to the already tightly packed environment. To add to this, Pyle masterfully mixes weird vocal snippets into his music in "Red for the Sun", "Shacks Built from Plyboard" and "Real Things" - all of them in thick Jamaican/Haitian accents which add a sense of partaking in a mass of some forgotten illegal/cult - the real standout here is "Red for the Sun", in which the looped "preacher" keeps talking about sun, blood and (not surprisingly) marijuana.

Ensemble Economique's newest album is truly a headfuck, and not for the faint of the heart. It also points into an interesting direction - it's a fusion between Shackleton-like dub and psychedelic drone/synth scene. Although it is sold out at the source (NNF website), you can still buy it from Insound or Midheaven Mailorder.

People who are into modern psych in general probably already know Adam Forkner's project White Rainbow. Long, free-form psychedelic ambient explorations. The man has a Bandcamp page, too. The albums can be "bought" through the name-your-price method - there is no minimum set, so you can download it for free, too, if you want! Very cool stuff, Forkner's music is quality in itself.

Click on the album cover to go the album's Bandcamp page.

Megabats - Goes to a Lemon

Another release from Debacle Records, this is one healthy slab of trippertronics from Megabats entitled "Goes to a Lemon". Listen to the album on the Bandcamp page, OR download it here:

Goes to a Lemon (link by The Radiant Now)
Posted by Unknown at 7:06 PM 4 comments:

The Slaves - Ocean on Ocean

Shoegazey (at least I think it's shoegaze-influenced, I've only heard Loveless by MBV, lol) drones with wordless (I think) vocals. This is how they describe themselves: "The Slaves are a girl/boy duo from Portland OR trading in gothic drones and slowed down 50’s pop and surf.  Using voice, feedback, and synths Barbra Kinzle and Birch Cooper create an overwhelming and melancholic beauty.  Mastered by Matt Carlson of Golden Retriever" (it took me a while to get over that 50's pop and surf thing, it's ridiculous how far people can go to sound original in their "inspirations"). Anyway, you can listen to the full album on Bandcamp, OR download it from here:

Ocean on Ocean (link by The Radiant Now)
Posted by Unknown at 6:18 PM No comments:


BANDCAMP
David Kanaga's blog
A Trip to the Moon (part 2) from David Kanaga on Vimeo.
Posted by Unknown at 5:53 PM No comments: 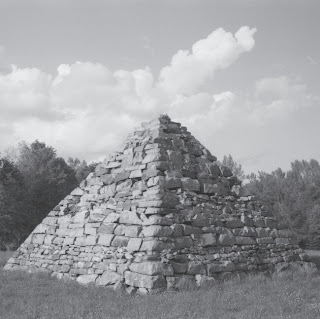 Sacred Harp is Daniel Bachman from Fredericksburg, Virginia, USA. His music is psychedelic folk heavily influenced by American Primitivists such as Robbie Basho - that is, amazing fingerpicking passages combined with heady droning ragas. Really worth checking out, this man puts an amazing amount of work into his music.
Download here!
Posted by Unknown at 6:43 PM 8 comments:

Pre-compass is Jason Edgil. He describes the name of his project: like Pre-cum-piss, like 'before there were compasses'. The sound of the project can be described as deconstructionist ambient/pop vignettes, heavily inspired by "SAW" era Aphex Twin, ranging from whimsical bursts of distortion ("Big Guns"), melancholic keyboard workouts ("Princessless"). The two real standouts on the album though are the opening track "Ipods", which sounds exactly like something Tortoise would come up with and "Mamma's a Cannibal", which just asks for a minimal techno/microhouse beat to be added. Lots of potential this guy has. Bandcamp
Posted by Unknown at 6:51 PM 3 comments:

Irmin Schmidt, Michael Karoli, Holger Czukay and Jaki Liebezeit shortly before they formed Can. Originally recorded in 1968. Stylistically, this is to Can what Amon Düül was to Amon Düül II: less structured, more improvised, somewhat whimsical/silly at times. Y'know, psychedelic rock/krautrock. The last track is a jam. 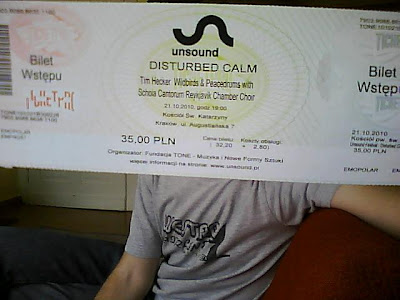 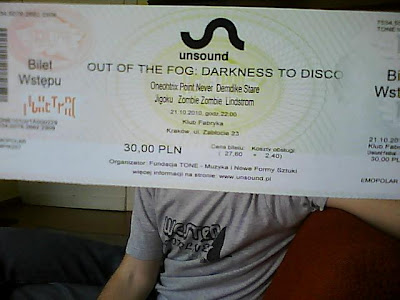 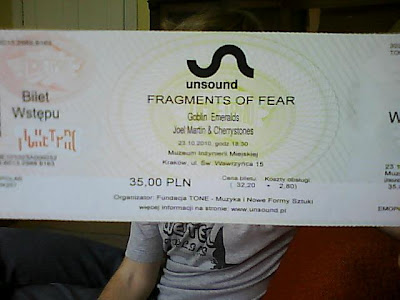 Not pictured: Ticket for Carlos Giffoni, Hild Sofie Tafjord, Anna Zaradny and Noveller on Saturday (because it's a free performance). 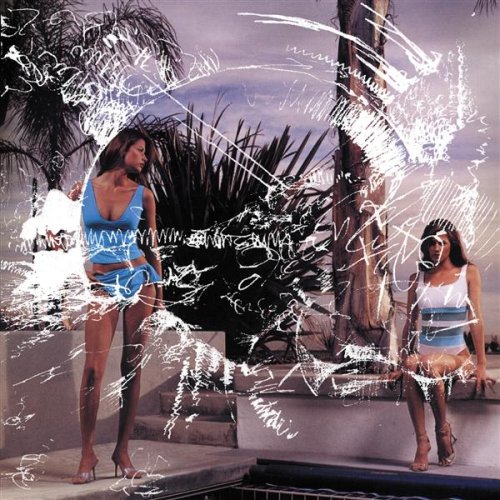 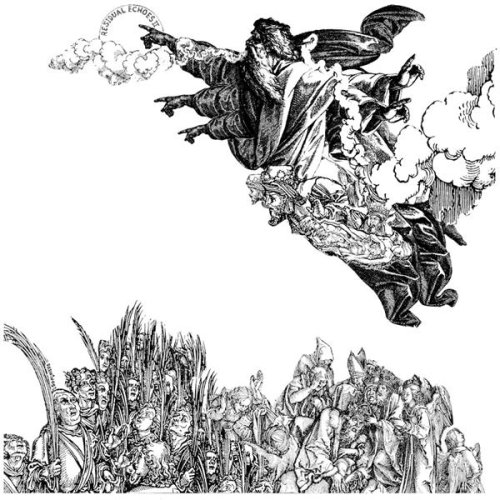 
Actually, while I'm at it, I'm gonna post links to the two albums from 2006 I've posted some two years ago... 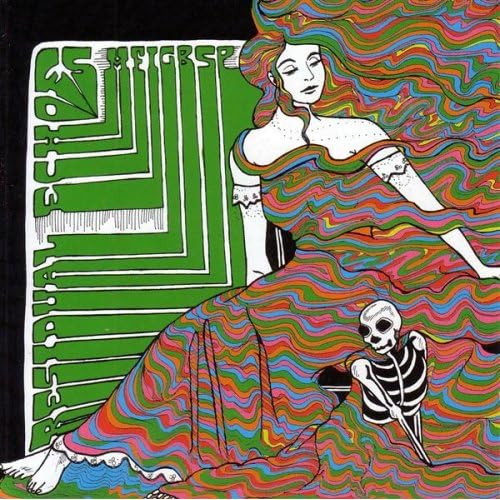 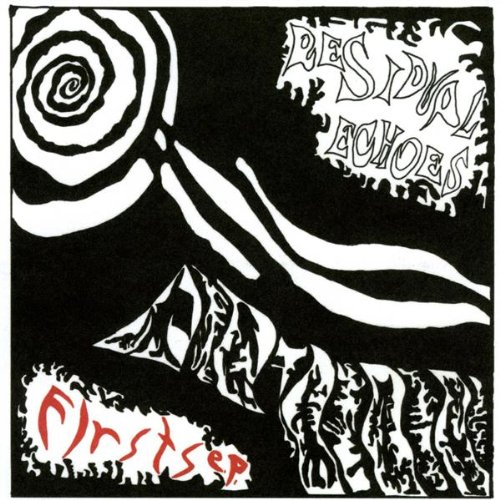 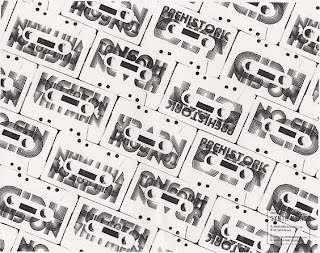 Great live album from the four synth masters, recorded in 2009, released on Protracted View. Wonderful droning/prog electronic soundscapes from OPN, KFW and PB, although it is Carlos Giffoni (aka No Fun Acid) who steals the show with his acid techno/house set. Get to it! Polymer Slug is the project of Adam Tramposh. He creates psychedelic electronic soundscapes using his Casiotone MT-65. The first two tracks are pure ambient, the remaining five tracks are warm synth noodlings ornamented with simple beats. You can buy the cassette on Overland Shark label website or listen to the entire album on the label's Soundcloud page.
Polymer Slug - Warm Forms by overlandshark
Posted by Unknown at 6:56 PM No comments: 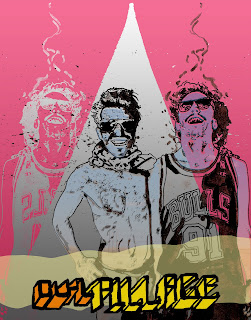 So, the other day I got an email entitled simply "U might dig this". Apart from that, the email contained only a link to Owl Pillage session on Nitetrotter. "This better not be some chillwave bullshit", I thought. And man, I fell in love immediately. Distorted, superreverbed (is that even a word) psych noise rock. Damn guys, I'm digging the fuck outta these. Recommended, especially if you're a fan of Heavy Winged, Rahdunes or Burnt Hills.

Owl Pillage - "We are High" - NITETROTTER Session by NITETROTTERSEXPARTY4U
Owl Pillage by Teslavision Intergalactic
Posted by Unknown at 12:00 PM No comments:

Asian Women on the Telephone

Asian Women on the Telephone (also abbreviated as AWOTT) are a self-proclaimed "Dada Rock" band from Moscow, Russia. Noisy, angular, semi-(or fully) improvised, artsy-fartsy, FUN. You can listen to their albums (and download them for free) on their Bandcamp page. Recommended for fans of, say, early Magik Markers or more chaotic moments of Sunburned Hand of the Man.

Panabrite on Myspace
Posted by Unknown at 6:00 PM 1 comment:

Diving Into the Pineapple Portal (link taken down by request)

A Sound Like Wailing Winter Wind Is Heard (Gift Tapes, 2009)

VSS 30 (link taken down by request)

Jason of Brother Raven requested me to take down links to two albums that can still be purchased on vinyl: "Diving Into the Pineapple Portal" on Aguirre Records and "VSS 30" on Digitalis Recordings.
Posted by Unknown at 5:20 PM 3 comments: 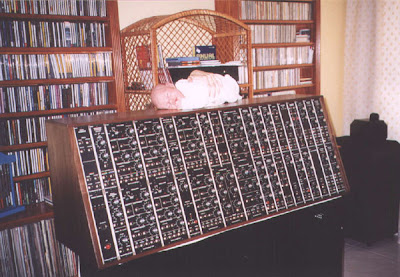 (not the actual cover art)
The first album by Chris Madak from Cleveland, released back in 2006 on his own label Deception Island. Definitely a highlight in his music career, "Living" offers four shimmering ambient/drone compositions with lenghts between 13 and 21 minutes. Drown yourself in sound. Higly recommended.

Mediafire folder containing free downloads of all four albums released so far.
Posted by Unknown at 10:57 PM No comments:

Listen to the album on Bandcamp
Posted by Unknown at 10:46 AM 4 comments: 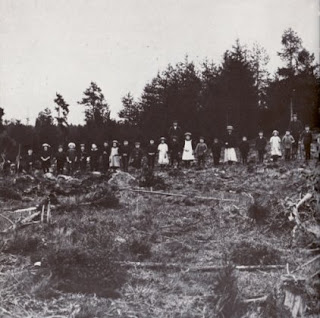 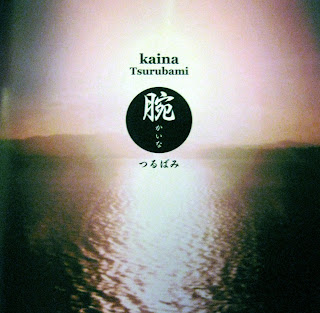 I cannot stress enough how mindbendigly amazing this album is. Heavily recommended for fans of psych music in general, and an absolute must for fans of Acid Mothers Temple and Japanese strain of psych.
Posted by Unknown at 6:13 PM 5 comments: