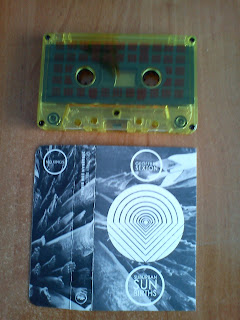 One of the most interesting things about minimal ambient and drone music is how rich in different textures it is. How many different moods and feelings can be expressed in a long, sustained sound - very small things can decide whether we're floating in a sea of bliss or we're shivering from the cold sounds. Geoffrey Sexton's tape definitely veers toward the latter - this album is definitely in the dark ambient/drone camp. Side A consists of a single droney ghost choir - bassy, cavernous and so, so incredibly cold. Like a brutally rudimentary, bedroom version of Lustmord or the darkest, spookiest moments of Super Minerals' "The Pelagics" stretched into some 15 minutes (the whole tape is a c30). Toward the end of the tape a relentless pulse kicks in, adding even more into the sense of dread. Side B begins with even more sonic wasteland - wasteland being a very good sense of the word, considering it sounds eerily similar to that music in Fallout 2 when you just stop in a random place on a map and wander the empty, endless desert. The layers are numerous and thick with barely recognizable remains of what once sounded like a string instrument. Few minutes into side B and the ambience dissolves into the high point of the entire cassette - a series of reverbed funeral, solemn trombone (or something which at least sounds like a brass instrument)notes, which create a slow, hypnotic melody, like a requiem over a dead world, a previously mentioned sonic wasteland. To sum everything up, Geoff Sexton (who is an experimental filmmaker) created something that could very well be a soundtrack to one of his films - bleak, unsettling and incredibly cinematic. A strong start. Recommended.
The tape is still available at No Kings. Grab it!
Geoff Sexton excerpt by No Kings
Posted by Unknown at 11:11 PM