Remember Matthew Akers, whose The Elders of New Detroit  I’ve reviewed a while back? Well, there’s a new “carpentercore” player in town, and his name is Spettro Family (real name: Stefano Iannone). But in addition to wonderfully polished and balanced 80’s-styled synth vignettes, Spettro adds some of the occultism and outer limits mystery which appears to be the staple of Brave Mysteries label.
The tape begins with an anthemic display of power (or maybe the powers of imitation?) “Post Partum”: a dynamic, yet somewhat nostalgic tune that begins in almost ambient territories, only to change to a thumping main theme which sets the mood for the rest of the tape. Spettro Family does not go for the simple carpenterisms though: where one might expect a cassette full of ultra-manly vintage soundtrack snippets, SF cuts through a wide variety of moods and styles. “1978 La Fuga” is a good example of this: it is a quick, even abrupt, transition from the dynamics of the first track to a melancholic drumless suite based on minimalistic melody  reminiscing the childhood years (as the title might suggest, even though I have a feeling Stefano wasn’t even around in 1978, but I might be wrong, considering the influx of “old-timers” playing 70’s and 80’s influenced music who actually were alive during that time, such as Panabrite or Stellar Om Source). Most of the track are short – they’re more like drafts, variations of basic schemes laid by John Carpenter soundtracks. Like the relatively calm, yet never touching the “relaxing” territory “Orrore the Great”, where subtle touches of sequencer set the pace to a quiet beat.
The flipside is set in a similar “80’s cop movie” feel, with lush synthesizer drops on throbbing bass lines, but with a few notable exceptions – like the almost ritualistic “Medjugorje” which contains samples of Lord’s Prayer recited in an Eastern or Southern European (Slavic) language – being Polish I can understand most of the words, at first I actually though it was Polish! This is one of the high points of the cassette – while most “carpentercore”-rs just try to replicate the action movie vibe, Spettro Family went into the more mysterious area, with sinister drones in the background more similar to the work of Burial Hex than Matthew Akers.
Spettro Family covers interesting grounds: on one side there’s lots of pagan symbolism and (probably) and influence of neofolk acts of the 1980’s, with Spettro referring to the cassette title being taken from Celtic and ancient Roman festivals; on the other there’s a fascination with polished 1980’s synth soundtracks and atmospheric electronics. Congratulations not only to Spettro Family, who managed to fuse two seemingly contradicting areas (the outsiderism of ritualists vs. the relative “mainstream-ness” of John Carpenter movies), but also to the Brave Mysteries label, who have an extraordinary ear for sonic curios and obscurities, being both “brave” in their choices and “mysterious” in their sound and roster.

The tape is available at the Brave Mysteries Shop.
Posted by Unknown at 6:30 PM No comments: 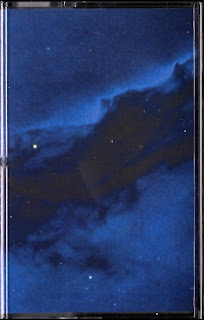 Spires is an alias of a mysterious Denver based musician who, according to the Lava Church’s website, has been dabbling in all kinds of music for nearly 20 years. The website also states that he’s a former US special forces veteran. Now I don’t know whether it’s true, or whether it’s just a clever hoax to thicken the fog of mystery around this Colorado individual, but I’m bought. Out of the three tapes I’ve got from Lava Church Records this one got me interested the most. And while it’s nothing groundbreaking, it surely is mesmerizing.
It might seem that the idea behind this record stemmed from starting at the cold, silent and snowy Rocky Mountains one day. Despite the rather generic image of space adoring the j-card, the cassette plays more like a soundtrack to the wind blowing on the higest peaks of the Rockies during the coldest and blackest night. The sound on the tape might be described as meditative, but it’s not the calm, cosmic New Agey meditation of, say, late Greg Davis. It’s a bleak, minimal study on extreme conditions – like the aforementioned mountain peaks, or, indeed outer space. Spires shows the outer space like it really is for fragile, weak creatures like us– it’s not beautiful, it’s not breathtaking, it’s inhumanly cold, empty and endless. Just like “Eyes Become Dust”, which take up the entirety of side B – despite being “only” 14 minutes long, it stretches beyond its time and becomes a frostbitten, alienating sound tapestry seeping from the speakers and sending shivers of cold through your spine.
What would’ve served as a melody in other ambient records is long gone here, smothered by abstract, glitchy experimentation operating with high-pitched white noise drones and unsettling synth wails reminiscent of early, Elusive Lunar Bow era Bee Mask (“Puzzlebox”) or ghost-choir like metallic ambience filled with blows of cold wind reverbed for maximum unsettling effect. At times the cassette fills much closer to the dark ambient legacy of Lustmord than the rest of the “tape drone” scene, bringing images of MKULTRA experimentation and mysterious, hallucinogenic interrogation techniques. When getting to listen to Spires’ Puzzlebox prepare for a journey into the unknown. Not the most pleasurable unknown, but a very rewarding unknown.

Get the tape from Lava Church Records.
Listen and download more Spires on Bandcamp.
Posted by Unknown at 4:31 PM No comments:

These Seattle, WA dudes walk the thin line between the apocalyptic, plodding drone doom, aggressive and unrelenting sludge metal and distorted and skin-peeling noise rock. Additional cool points for the terrifically recorded drums, which give lots, LOTS of energy to this little record, making it even more worthwhile. Thunderous, bassy and instrumental. Recommended!

Noise-A-Tron
Posted by Unknown at 10:21 PM No comments:

Despite the associations with the freak folk (or “New Weird America”, if you will) scene, the opening sounds of the Madison based collective’s newest cassette, released on Wisconsin’s esoteric label Brave Mysteries, come closer to Lee Noble’s lo-fi outsider drones than loosely formed nature jams. Eventually, the sparse percussive sounds emerge from the gentle, ambienty loop. The impression of an instrumental jam gradually unspooling fades away quickly, because on this tape Second Family Band decided to go into a far more synth-based areas full of eerie echoes and dreamy shimmering synth solos.
Second Family Band were always the “connectors” between the two scenes: on one side we have the “family” aspect: music as a communal experience and the result of sharing creative ideas in the form of improvisation, putting heart and soul into the act of creation and channeling positive energy; on the other side there’s an “experimentation” factor: channeling the spirits of mid-century avant-garde composers, early electronic shamans (such as Popol Vuh) and crafting a special brand of meandering, psychedelic electronic music with the intention of “zoning out” the listener. Twelfth Night Reunion  is an abstract assemblage of forms, cavernous and spacy with mercilessly reverbed synth waves, yet always “littered” and “busy” with stray guitar noodling and percussive clatter. The closest modern comparisons would be the early work of Super Minerals (e.g. Pelagics)  and the more avant-garde moments of No Neck Blues Band (e.g. Letters from the Earth) and Sunburned Hand of the Man. But after a while, when you think you’re stuck with haunting calls and hazy reverb, the side hits a faster, funkier side (“Feast of St Nicholas pts 1 & 6”) with a bass and organ driven freestyle hippie jam with a liberal use of cymbals by the drummer. “Under the Harvest” goes from a slow, acoustic start to a rhythmic, moaning kraut-folk in the style of Amon Düül II’s Phallus Dei.
Side B gets back on the track with droning, wandering kosmische synth lines (“Feast of St Agnes pt 5”). This is Second Family Band at their most cosmic, taking numerous cues from classics of early ambient and progressive electronic music. Furutistic, desert-like drones loom in the distance while a dark cloud of bassy, humming electronics rises above the horizon, like a brewing storm. The prog suite then goes into more abstract areas, with eerie synthesizer creating a relentless rhythm while a mysterious, processed voice moans in the background. While on the previous side the ambient, electronic track was an introduction to the folkier, “freakier” parts, here it takes the majority of the side, sinking itself in as it progresses. Unlike Excepter, which split from the original line-up of No Neck Blues Band to make purely electronic music, Second Family Band feels no need to separate themselves for playing folk and electronic music, here they make smooth transitions between the areas, often overlapping both areas with acoustic guitars co-existing peacefully with sequencers and synthesizers. And while you might think “this has been done so many times before”, one cannot help but marvel how easily Second Family Band connects both ends and how comfortable they are with both worlds. A nice addition to the SFB discography and a nice little tape keeping just the right amounts of otherworldly meditations and outsider freakouts.

The tape is available at the Brave Mysteries Shop. Get it!
Posted by Unknown at 10:05 PM No comments: 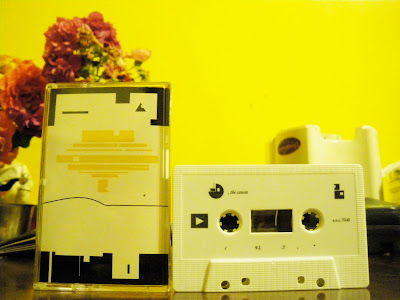 Rene Hell’s The Canon EP might be Jeff Witscher’s most spastic and “busy” work to date; on this cassette he ditches the ambient aspect of his music almost entirely, instead focusing on cyclical repetition and dense clusters of sound, bordering on glitch at times.
The opener, “Variation Third” seems to be the closest to his usual oeuvre as Rene Hell, with a simple synthesizer sequence relentlessly repeating its way through all sorts of small bleeps and bloops with massive, bassy drones that can almost be disguised as melody rising and falling every now and then. At the end, the piece’s structure is almost toppled by a cluster of rapidly played (or programmed to be rapidly played) synth piano notes, which continues into the second track, “Melody for Arkham”. What is characteristic of this tape (and maybe of Witscher’s latest work in general) is the intentional “fakeness” of sound – one can tell it’s a synthesized piano from a mile off and Rene Hell isn’t trying to hide this fact. Quite the contrary – he’s taking refuge from the rest of the scene with his super-polished and super “fake” sound. “Melody for Arkham” is fast and raving mad, with superfast clusters of piano notes creating a ripped, irregular melody which brings to mind La Monte Young’s A Well Tuned Piano on amphetamines. “Med School Prince” follows the same path, this time blending the jagged piano madness with massive, gradiental drones, reaching almost disorienting heights. The closing “Nazi Love Motel II” can be best considered as “whimsical” – simple, repeating piano motive (oh, that fakeness of sound!) is joined by high-pitched whining and playful glitches resembling the sound you make when trying to imitate a horse (not the neighing, the other sound).
The Canon is a nice little addition to Rene Hell’s discography. The music on the tape is not life changing, or extremely atmospheric. Instead, Jeff’s trying to craft his own kind of hyper-real, maniacal minimalism played through the prism of skewed IDM and glitch, falling somewhere between La Monte Young, James Ferraro and Autechre. Rene Hell’s idiosyncratic sound is further represented in his art, merging fashion world and celebrity imagery with abstract shapes, random dots and commas and cryptic track titles.
Rene Hell - The Canon
Link via The Radiant Now
Posted by Unknown at 5:32 PM 2 comments: