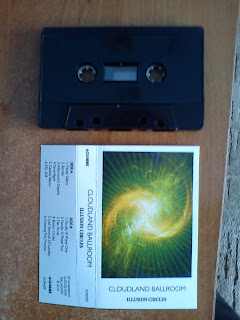 It appears that the psychedelic bedroom electronic music underground reached a point where the reference points in music description are not made only to kosmische musik pioneers of the 70s and the ambient/new-age performers of the late 70s/early 80s but also to the other psychedelic bedroom electronic bands of the 2000s. Such is the case with the Cloudland Ballroom: the blurb at the Aguirre Records website likens the sound of Illusion Circles to early Brother Raven (and JD Emmanuel, too, but that only proves the first part of my argument). BR was “revolutionary” in a way that it tried to separate itself from the “guy holds down a synth key for 15 minutes” aesthetic and go for actually short, richly melodic and rhythmic tracks – Cloudland Ballroom does the same on Illusion Circles – there’s a great progress since the first album (released on Sacred Phrases), which fit the loooong droooone description. The 40 minute cassette is divided into 12 tracks, 6 tracks on each side. Unfortunately, the sides are not labeled in any way, so it’s kinda hard to guess which title fits the music. This isn’t entirely bad though; the mystery surrounding each side allows to play a little game of guessing – which title fits the track better? The music itself has a warm, vintage (duh) feel. The new age athmospherics are present throughout the entire cassette, always dreamy, never kitschy. One of the tracks even features vocals vocodered beyond recognition, which become just another synth layer over the pulsating sequencer and the soft drone. Actually, soft drone might be a good description for the entire cassette: but it’s not drone either; while sustained notes are present in most tracks, they are not the main focus – the listener is immediately drawn to cosmic melodies and squiggly effects, beautifully packaged in a hazy lo-fi atmosphere. Illusion Circles is a good album not only for fans of Brother Raven, but also for people who look for something beyond the usual drown-yourself-in-monotonous-sound dirge, something with tightly constructed structures, short and to the point.

The tape is still available at Aguirre Records. Grab it while you can!
Apparently, James has put the entire Illusion Circles on Soundcloud, not available for download, but now you can listen to the entire album!
Illusion Circles by Cloudland Ballroom
Posted by Unknown at 2:35 AM

love this album,it's very much like a sound track to a 60 sci fi film