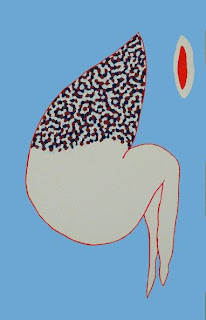 Board Music II, released on Irish label Noise Not Music is a cassette compilation of tracks created by the users and friends of the Internet experimental music community Fangs & Arrows. Those familiar with F&A will know what to expect: the board first and foremost deals with drone and ambient in all shapes and colors. So it’s no wonder the comp will contain all sorts of textures: the nightmarish, acerbic noise jams of Zonal Taste Wand (“Sleep Deprivation”) or Robe (“Serenade in Black”) provide a stark contrast to the vast and dreamy soundscapes of UUUUUU (wonderfully delayed and layered “Mirror Lies”) or Polymer Slug’s “Cloud 3” (wonderful guitar-synthesizer harmony). The musicians, often dealing with electronics often break the boundaries of what is considered “drone” or “analog drone scene” or whatever other name it has. For example, “Pancakes” by Coloured Jaw Chest stands much closer to the raw glitches of early Morton Subotnick or Keith Fullerton Whitman circa Disingenuity / Disingenuousness than Marble Sky and Boys of Summer’s “Rainbow Islands” appear to be taking cues for modern retrofuturists such as Panabrite or kosmische revivalists like La Revelateur and Jonas Reinhardt.
Like on many great compilations there are almost unknown artists next to well-established names. These are either up-and-coming bands and musicians, paving their way to the drone/psych stardom or just obscure names who decided to submit a track here and there and will remain hidden and undiscovered in the future. One can hope it’s the first option here, because music by those obscure projects (whose play count usually revolves around a few dozen on Last.fm) is some of the best on the album – and the most detached from the usual “F&A = drone” association. “Pummel” by Maschalismos is a smokin’ scum rock jam in the style of Heavy Winged, Burnt Hills or Owl Pillage while the Poor Farm’s “Apples, Peaches, Plums, Pie” explore the more freak folk-ish areas with their suffocating, almost shamanistic atmosphere turning into a lo-fi swamp blues improvisation. But for me one of the best tracks on the compilation is “XVIII: The Moon” by Dreamers Awake, a soothing ambient lullaby constructed almost entirely of sparse guitar strumming recalling a less dark Knive by Svarte Greiner and a dubby psychedelic pop of Dark Marks, whose “Jembalaleah” appears to be influenced by latest Peaking Lights.
Board Music II provides a satisfactory and exciting outlook on the condition of the tape scene today, especially of the artists centered around Fangs & Arrows board. It shows that many of them can step outside the limitations and reach out to other genres. Because one sometimes have to take a rest from all the droning drone.
Stream and download the compilation on Bandcamp (contains 6 tracks not available on the cassette
Posted by Unknown at 3:19 PM