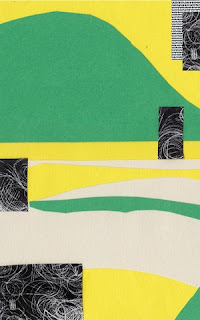 In the thoroughly motorized world the notion of “music for highways” comes up every now and then and is realized by many bands and musicians in many genres. Be it the original “highway music” album, namely Kraftwerk’s Autobahn, the rhythmic post-punk of the late 70’s to the seemingly endless stream of minimal and ambient techno releases in the 1990’s and 2000’s Germany, there is a constant need to create music best suited for driving lengthy spans of asphalt for a long time.
Whatever genre we’re talking about, in music for driving the rhythm is essential. A steady, unchanging rhythm that sets the pace to everything else – the rhythm rules, it is the Master, everything else is a slave to the Rhythm (unintentional Grace Jones reference, yo). On CA 80’s-90’s, a compilation created from FWY!’s (pronounced Freeway) previous EP’s, Californian Edmund Xavier presents his version of autobahn musik. Almost all of the titles are named after specific stretches of Californian highways (“99 FWY”, “The 65”, “The 51”, “HWY 101”), putting Edmund’s music in an almost conceptual, “site specific” territory. By listening to the differing moods on each track, one can almost make out the geography or the weather, or even the time of the day when the highways was driven, inspiring the musician to create a given piece.
I’ve already mentioned the importance of rhythm in any kind of driving music – but in FWY’s case the rhythm is not always the same. It changes from track to track, from the softened, shoegazey version of self to the hard, crisp and clear rhythms existing somewhere between minimal techno of German Kompakt label and Warp’s early 90’s IDM. The deceptively simple bass lines are accompanied by dreamy, somewhat melancholic guitar work, which stretches the pop hooks into an oneiric, lulling tapestry. Despite being disciplined and rhythmical, the album does not take command of the listener; instead the sound seeps out of the speakers/headphones like a relaxing, non-malevolent gas. And speaking of Gas, the last track of the album (“The 5”) may bring certain Wolfgang Voigt connotation, with the rhythmless outro  so similar to Voigt’s Zauberberg.
FWY!’s CA 80’s-90’s is a great driving album. One thing is important though – it is better not to listen to the album while driving and being tired. The ambientalized, reverbed bliss of the album might kick the listener into a sort of road trance, or, even worse, sleep. But then again, being tired, one shouldn’t be driving in the first place, should he?
The tape's available at Brave Mysteries. Grab it!
Posted by Unknown at 12:47 PM