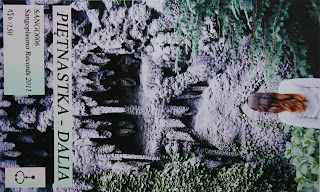 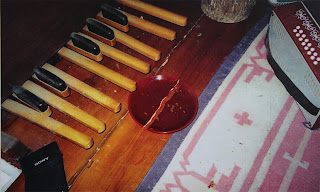 Once in a while, a release comes along that is so different, so hard to categorize that it’s just mindblowing. Dalia, the debut release by Piotr Kurek’s new project Piętnastka (“Fifteen” in English) contains some of the most well-composed and bitchin’ tunes of the year. A blend of whimsical, cinematic folktronica, IDM and some psychedelic guitar work, Dalia is probably the best thing released by Sangoplasmo Records to date.
In terms of sound and style Dalia is somewhat similar to another Sangoplasmo release, Pompa Funebris by Folja. But whereas Folja’s sound was more sparse, purely electronic and trying to appeal to the more 80’s revivalist (psych drone/chillwave/carpentercore etc.) crowd, Piętnastka’s Dalia is a dense, cluttered affair where minimal electronics set the tempo for all sorts of “live” and traditional instruments: accordion, drums, electric organ, guitar et caetera. The tracks are filled with a sense of child-like curiosity (without resorting to childishness) and mischeviousness, like restless schoolboys exploring the local abandoned factory ( “School Boy”) or a group of children playing paper chase in the woods (“Podchody”). One of the strongest points of the tape is the sense of rhythm – every track is pretty fast-paced with beats ranging from lethargic minimal techno (“Czterdzieści Cztery”) to thumping, almost tribal drums (“Salto”). Even though Kurek seems to be taking cues from Four Tet’s Kieran Hebden (the cassette sounds like a mid-point between Rounds and There Is Love In You), there are certain non-folktronic (a lot of you are probably foaming at the mouth at the very sound of the term “folktronica”) moments – like the blissful, minimalistic “Dice”, a condensed version of Terry Riley’s “A Rainbow in Curved Air”.
This is my first contact with the music of Piotr Kurek, who also plays in the band Ślepcy and releases music under his real name. Dalia is an exhaustingly beautiful and energetic cassette and it’s a shame that because of the format and the relatively low profile of the label releasing it the album might go unnoticed in the music world. Albums like Dalia recognize more recognition – perhaps one day Piętnastka will re-issue this album on vinyl?
Available at Sangoplasmo Records. Grab it now!