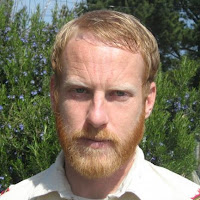 Here is a short interview I conducted with Brian Pyle, the guy behind Starving Weirdos, RV Paintings and Ensemble Economique. The interview originally appeared on a Polish music website Niezal Codzienny. Here is the link to the interview translated to Polish. Below is the interview in English.

I just love the band name „Starving Weirdos”. Where did the idea for the name come from?
It just came to merrick and myself one day while driving around Arcata where we live.  There's loads of really 'off-the-grid' type 'fringe' characters and we're thinking how the most freaked-out we're 'starving weirdos' like the ones who just don't give a fuck and really freak out more conventional/normal type people.  Full-on indifference!  and it hit us what a killer name that would be for a band. And really LOVING the idea of not giving a fuck and just going for it.
How many people are there in Starving Weirdos? Is the band’s lineup fixed or is it an open collective?
The main folks are Merrick and myself and our main collaborator Steve Lazar whom Merrick and myself have been playing with for years. Beyond steve there's 2-3 more people we like recording with. And after the initial recording it's just Merrick and myself.  Cutting up the recordings, reconceptualizing/composing the pieces, overdubs, mastering. This post-recording 'process' takes up most of our time with SW. It's not an open collective and esp. when we perform live we have a fixed line-up.
The music projects you partake in are often described as ambient, drone, or simply psychedelic music. Many musicians have their own name for the music they create – do you have any?
Avant-wow! Psychedelic is also pretty apt.
Do you happen to record music in unusual places, like forests, caves or beaches?
Not so much anymore. But we have done loads of recordings in these giant concrete chambers over at the local university.  It was like a giant reverb chamber...fucking NUTS. I do LOVE recording in different locales.  We had a tremendous jam out on some bluffs over-looking the ocean a couple months back but the recording wasn't great.  Most of the material we release nowadays is recording in like a 'living-room' type enviros.  Just enough space to stretch our gear and recording equipment.
You expressed your interest in performing on OFF Festival. How did you find out about it? Under which moniker are you planning to perform?
Just searching over at LastFM for festivals happening in europe around late July/early August and looking for fests that had interesting line-ups.  It would be solo under my Ensemble Economique moniker. i really wanna visit poland.  Ii LOVED the VBS doc 'From Poland With Love' and SW has collaborated with Polish artists in the past.
With which ones?
With Wilhelm Sasnal & Roman Dziadkiewicz on the EN/OF series. Edition 038.   SW did the LP and they did the art.
Your albums often make use of field recordings. Do you record all the recording yourselves or do you also use found sound?
Both. But it really doesn't matter to us.  With both SW and EE.  the primary concern is the sound itself and how it relates to the music in regards to both field recordings and found sounds. I've used fire sounds in the past with EE and to really get that sound from a field recording i don't think I'd be typing now!
The album “Psychical” by Ensemble Economique uses many spoken word passages. Are they samples or were they recorded from scratch specifically for the album?
Both! The samples I labored over.  Really hard to connect some random sample and have it be really effective.   So yeah really happing with how the voice samples turned out.
Some reviews compared the sound of “Psychical” to artists like Shackleton or Demdike Stare. Are you a fan of their music or are the similarities a mere coincidence?
Mere coincidence.  I hadn't heard either Shackleton or Demdike Stare until after 'Psychical' had been released.  I've of course heard them now and i think they are both GREAT!  Really exciting for me to hear other artists exploring similar terrain.
What are your plans for the future? Any exciting collaborations/new projects?
Yeah!  I'm collaborated with High Wolf on a live set soon here in Humboldt on his west coast tour soon.  I'm releasing an Ensemble Economique single this friday!  Feb. 4th!  Super-excited for everyone to hear this new EE single...I'm really stoked on it.  I also have a special collaboration with the Outer Church for the 'Weird Tales for Winter' airing every night over at Resonance FM.  Our episode airs Feb. 5th...it's great!  SW has an LP coming out soon on Bo'Weavil Recordings and we've just finished a record for Amish.  Bunch more neat things in the works!  can't think of them all right now.
The “Weird Tales for Winter” will airing on Saturday, Feb 5th on the London radio Resonance FM from 10:30 to 11:00 PM GMT. You can listen to the radio on this website: http://resonancefm.com/listen

EDIT: Just like he said, Brian released a new single on Feb 4th, as Ensemble Economique. It is called "To Feel the Night as It Really Is" and you can listen to it below via Soundcloud. You can also buy the mp3 (it's only in digital form) on Midheaven.

To Feel The Night As It Really Is by Ensemble Economique
Posted by Unknown at 5:05 PM