The story goes like this: Adam from the wonderful young ambient/drone label Sacred Phrases sent me four tapes from the latest batch. He didn't ask me to review them, but I did anyway, as a token of gratitude of sending me the tapes. I hope you find the reviews useful and if you don't know this label yet, check it out immediately! Really quality stuff. 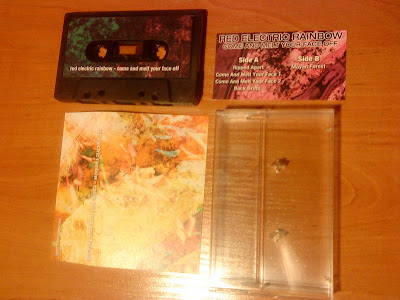 Red Electric Rainbow – Come and Melt Your Face Off (SP-17)
The strongest (or at least the most immediately accessible) cassette of the whole batch, Daniel D. Smith’s tape opens with a simple, yet powerful arpeggio backed with Astral Social Club-like bubbly synth squeals, faithful to Daniel’s tradition of making self-proclaimed “face-melting music”. RER hits the listener with immediately recognizable melodies amidst dynamic synth sequences, which makes the tape stand in contrast to the slow burners in this batch.  The music here is zoned out, dreamy and somewhat nostalgic. The album’s title challenges the listener to lose one’s physical form and dissolve into sounds and this tape is damn effective at doing so. The music gets slower and more meditative towards the ending. The entire side B is filled by the track entitled “Mayan Forest”, which features faux-tribal synth drumming providing a skeleton for lush, rainforest ambience reminiscent of French tropicalist High Wolf. Recommended. 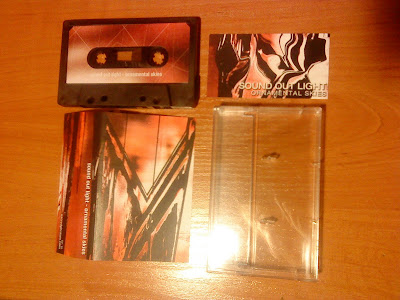 Sound Out Light – Ornamental Skies (SP-18)
Sound Out Light’s “Ornamental Skies” is the longest cassette of the batch, clocking at some 40 minutes. A long drone ornamented with the high-pitched droplets lasts for the vast majority of side A, near the end this soothing soundcape transforms into a nondescript field recording voyage accented by regular echoing bass outbursts. The whole thing sounds like walking through an abandoned factory which somehow manages to keep running by itself even though all the workers are gone. Side B begins with dark ambient atmospherics: a slow, bassy drone with some indescribable, mangled field recordings slowly gives way to a distant pulsing sequence which starts to rise; the sounds, hidden in the back in the beginning now begin to take a shape into something that sounds like a cross between cracking ice and falling bricks. Like a soundtrack to a tale of a group of survivors of a giant mine/building collapse: serious and somber yet gradually filling itself with light and hope (akin to the project’s name) in the style of Emeralds’ “Allegory of Allergies” minus the guitar. As the drones get softer and more relaxing, they are accompanied by gentle washes of white noise, like the shore of analog sea where the survivors take the rest, watching the waves. 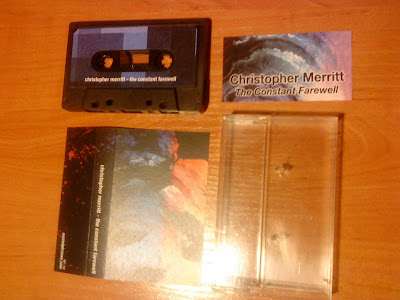 Christopher Merritt – The Constant Farewell (SP-19)
Christopher Merritt’s tape begins with pastoral drones descending upon one another in the style reminiscent of Loren Chasse’s OF project. As the whole thing gains more layers, everything gets submerged in calm washes of electronic noise. This is no harsh noise though; the edges are rounded, everything is smooth beyond recognition and coexists harmoniously with the glassy drones which sound surprisingly un-synthy. But the best is left for the end, when guitar improvisations rise from the sea of drones, crowning the ambience. Side B is more dynamic; Caboladies-like spikes “attack” the listener from the very beginning, paving the way for long (way lengthier than on side A) sustained notes. The difference here that instead of pastoral meditiation here things get immense – the washes of white noise are present again, but this time they seem to propel things forward at a great speed instead of providing lush ambience. This leads to a rising and falling melody, which constitutes the main part of side B and gets gradually fragmented towards the end, eventually becoming a set of reverbed pulses. 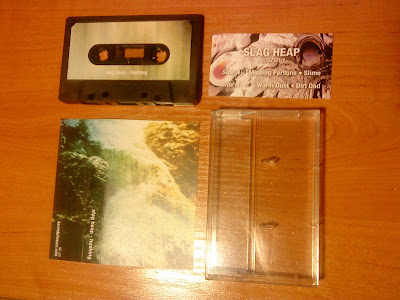 Slag Heap – Hushing (SP-20)
Perhaps the most demanding tape of the whole batch, Slag Heap’s “Hushing” is a lo-fi drone expedition in the vein of pre-Rene Hell Jeff Witscher; improvised synth melodies emerge from a rudimentary, two-tone basis, a melancholic, retrofuturistic vision of loneliness and fear (there’s a reason first track on Side A is called “Missing Persons”) and “Slime” is a rough, murky sewer exploration, where a melody can be barely recognized under a wall of distortion. While side A was still keeping some semblance of melody, side B consists of harsh drones stacked upon one another: in “Warm Dust” a bassy note provides a background for a noisy tsunami that rises at falls at a tectonic rate, this is cut short and suddenly goes to “Dirt Dad” which is a relentless electric sunburned pulse, which feels like burning a hole in the forehead using a magnifying glass during a sunny day.
Posted by Unknown at 7:09 PM

thank you! any chance to get Red Electric Rainbow?

@Anonymous - unfortunately I have no equipment that would let mi rip cassettes to mp3, besides I don't know whether Dan would agree to have this tape ripped. You should check out Soulseek though, it might be there.