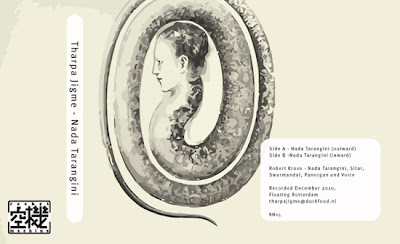 Until lately, Netherlands’ Robert Kroos has been more known to the noise aficionados for his “bleak ultra noise” project Torture Corpse, which served as a creative output for bone-shredding outbursts of sonic energy. This extreme and brutal music, however, is just one side of Robert’s work as a musician. Tharpa Jigme is his another project, where he goes into the exactly opposite side of the spectrum, replacing nihilist noise with blissful, meditative synthesizer drones. Those are not your simple synth drones, however. What sets Tharpa Jigme apart from the countless other “floaty ambient” projects is his fascination with classical Indian (Hindustani) music and traditional Indian instruments. On the j-card of the cassette Robert lists Nada Tarangini, Sitar and Swarmandal and his voice apart from the usual suspects (synthesizers).
Side A’s “Nada Tarangini (Outward)” is the more extroverted side, layering one exhilarating drone upon another while the sacred sitar strums tirelessly throughout the entire length of the track, resulting in a sort of droning mass of light reminiscent of Sitaar Tah! or the less looping moments of Kawabata Makoto. While the opening drone seems impossibly heavy, it manages to get even heavier and more intense as the track progresses, becoming an immense monolith which somehow manages to stay incredibly light and meditative instead of crushing with its heaviness. Towards the end of the side, the massive, massive theme gradually fades out, marking the end of the more ecstatic, louder meditation and preparing the listener for the more introspective, quieter side B, “Nada Tarangini (Inward)”. The second track hits the darker, more mysterious areas. The energy and intensity of side A is gone, being replaced instead with sparse sitar strumming and almost dark ambient synthesizer swells, exploring the deeper, often more sinister sides of the psyche, the ones we prefer to keep well hidden, pushed as far back as possible. And while the “Outward” side was loud and seemingly designed for listening through loudspeakers at highest possible volume – so that the sound can come out freely to bounce between the walls and even to stream outside, through the open window and into the world; the quiet ambience of “Inward” is a specifically headphone listening, especially the very last part of the cassette, where the music becomes a barely audible drone fadeout.
Nada Tarangini is yet another indication that the musicians are looking for more genres and inspirations to add to the basic drone. The classical Indian instruments are a wonderful addition, and even if their presence on side B is not very noticeable, they CREATE the sound of side A, without which maybe it wouldn’t be half as impressive. We can only hope for more sitar-infused immersive drones in the future. Great job, Robert Kroos.

The tape's still available at Rocket Machine. It's limited to 50 copies so it may be gone fast! Also, there's the entire side A available for stream from Soundcloud.
Posted by Unknown at 3:25 PM

To me music was a force already within me when I started getting involved in the popular scene. It was a necessity for me - like food or water.

The stronger varieties will numb your body and put you to sleep. Great for relaxation, stress relief, and couchlock. Marijuana Hybrid is the best for bud smokers and patients. Cannabis and hemp have been used for thousands of years as a naturally growing herb, its reputation as a drug in many parts of the world have complicated the relationship between users of cannabis oil and hemp and authorities in certain parts of the world.