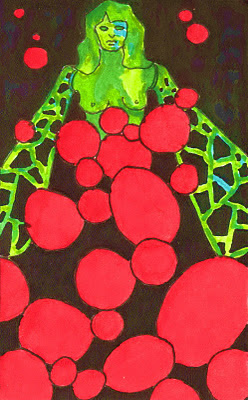 One thing I was wrong about when reviewing M. Geddes Gengras’ massive The Empty Space was the assumption that the whole lot was recorded during one or two live performances. It was not, and as Ged Gengras himself jokingly noted on his Facebook, if that cassette was a documentary of one performance, he probably wouldn’t have left the venue alive. The case is different with Belgium’s synthesist Jurgen de Blonge, who’s been crafting electronic soundscapes since the 1990’s. Stay Away From the Towers is a documentary of two live performances conducted in clubs in Belgium and the Netherlands. No edits, no overdubs, no post-production. Final destination.
The comparison between MGG and Kohn is not accidental: both tapes are equally massive and stunning – both clock at around 90 minutes and both take quite liberal cues at the previous eras of electronic music. While for Ged Gengras it was the raw, glitchy electronics of Morton Subotnick, Fifty Foot Hose (minus the psych rock element) or even Karlheinz Stockhausen, Jurgen de Blonde looks at the Berlin School era and progressive electronic masters of the 1970’s and the 1980’s. Each side of the red, unlabeled tape is a lengthy, ever-changing jam of rhythmic electronics and snakelike melodies treated with a pinch of outsider synth weirdness. De Blonde crafts intense cosmic voyages of the best kind: the ones in which the listener gets truly lost and loses the track of time, where seconds stretch into hours and hours into seconds, where the change in the ever-flowing rhythm or melody can be noticed only after several minutes, where one gets zoned out even with deeply focused listening. Once one gets over the slightly abrasive drones that de Blonde likes to put in certain places of the recordings, the world of emotions, images and scenes unfolds as a reward.
One of the best elements of this cassette (apart from its head-spinning length) is the perfect balance de Blonde keeps between the Berlin School worship and the more abrasive, abstract experimentation. The melodic, progressive parts and the reverbed hiss, crackles and drones are kept in equal proportions, serving as interludes or, in a great prog fashion, “movements” of one track. I can almost imagine a projection screen behind Jurgen while giving performances with various animations as he enters different phases: abstract, psychedelic animations of non-defined shapes or oscilloscope going haywire during the non-melodic sonic bricolage and fragments of films like “Fantastic Planet” or “The Holy Mountain” during the melodic, proggy parts. A great record of two great performances by a somewhat overlooked European synth wizard.

Copies still available at Sloow Tapes, but knowing their stuff is all killer no filler, they might be gone in no time. Be quick!
Posted by Unknown at 3:48 PM

Hi!Thanks for sharing!I heard some similar samples to these tracks, i left link here -
www.lucidsamples.com

We grow and sell varieties of marijuana strains. Available: We have got; flowers, harsh, Edibles,concentrates, pre rolled, shakes, seeds,

High life ganja provides best quality ganja. You can buy legal weed online. we aim to provide a solution to our patients anywhere across the World. We deliver in almost all states in the US and Puerto Rico. We are available in Canada, UK, USA, South America, Europe and Australia. Here are some quality of weed:

High life Ganja is one of the national and worldwide pioneers when it comes to providing medical cannabis patients with nothing but the best .It is now possible to purchase your medical cannabis online and have it delivered by mail, register online, then make the payment through the website and have your weed mail delivered to your house! It is a safe option and the delivery is guaranteed to ship within 2-4 business days

Lords of Kush provide too many Kush Afghan Kush | Pound cannabis | Buds Indica strain.We deliver in almost all states in the US and Puerto Rico. We are available in Canada, UK, USA, South America, Europe and Australia.
Afghan Kush


how to buy weed online


where to buy marijuana online


wax and shatter for sale


can you buy weed online


how to order marijuana online


can you buy marijuana online