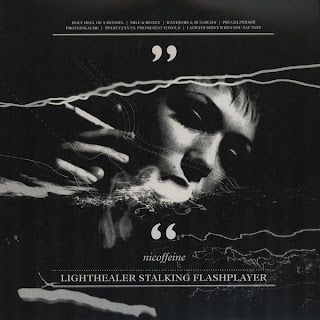 Lighthealer Stalking Flashplayer, the newest LP from the German noise rock trio Nicoffeine is a disorienting, amphetamine-fueled black mass followed by the world’s hardest coming down. Any sort of gentle introduction is an alien concept to these guys. There is no quiet guitar part, no gradual intensification or at least a fade-in. The very first track, “Holy Hell of a Himmel” throws the listener into the ultra-distorted, breakdown-filled mental breakdown of highest order, changing pitches and shifts with mathematical precision, obscuring the guitar tones to the point it becomes a thunderous bass propelled, sludgy shoegaze. Free noise units such as Gravitar, Heavy Winged or pre-Boss era Magik Markers might be used as points of reference, but while for most of the time there were elements of post-rock, free improv or straight-down psychedelic beauty hidden under walls of feedback and distortion those bands so abundantly use (or used), there is none of that in Nicoffeine’s music. The Germans’ music is infused with a sort of nihilist, hardcore punk or maybe even grindcore negativity, which they cleverly deconstruct and re-shape for their needs.
It takes a few listens to notice that most of the tracks are actually constructed and well thought out compositions and not just carnage for the sake of carnage. Once we get over the incredibly overdriven, high-pitched guitar destruction, one can notice how tight the bass is with the brutal, fast notes and the seemingly anarchist drumming isn’t all that anarchist after all and the only thing keeping the album from becoming a possible noise punk gem is the length of the tracks and the lack of vocals. The shorter, 3-4 minute tracks share space with three monsters, each well over 10 minutes long, with the very last track, the 16-minute noise/drone behemoth “I Always Shine When You Say Nein” devolving into a monstrous, cavernous amplifier hangover not far away from The Dead C’s “Bury (Refutatio Omnium Haeresium)” off their Trapdoor Fucking Exit.
The brutal and chaotic music of Nicoffeine is accompanied with a simple, yet effective packaging: what you see above is not the actual LP cover, but rather one of two inserts  containing information about the tracks, the record label and a few photos of the band. The cover itself is black on both sides, with a white vinyl inside. The pure blackness of the cover reflects the pure blackness of the sound and the white vinyl signifies the amphetamine craze of the music on the format, echoing Velvet Underground’s White Light/White Heat, which indeed was a hymn to the white powder. The possible VU inspirations are further reflected by the track titles, which often allude to the darker/more twisted sides of the human sexual psyche, cleverly referencing fetishes (“Milf & Honey”, “Handjobs & Runaways”, or “Motocrossdress” off their Admiring Those Artholes LP). Nicoffeine is something to be watched and heard – the ferocity of their sound really puts them somewhere above most of their contemporaries in a scene where it’s hard to be harsher, louder and noisier.

hey i added you to my blogroll, would it be cool if you did the same? http://plasticinetropics.blogspot.com