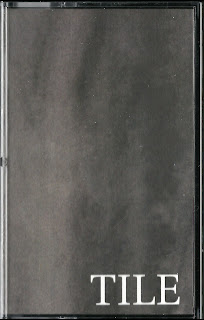 The unassuming and simple cover of Tile’s Universal does not reflect the catchy content of the cassette lying underneath. Tile is the song-oriented incarnation of Jeff R., who was previously known under the moniker Sky Stadium, where he created blurry, drifting ambient passages.
Universal is a collection of 8 lo-fi synth pop songs with somewhat shoegazey vocals – quite a departure from his “usual” work in the musical sense, but not in chronological sense. After all, the 80’s were not only the era of ambient pioneers and post-hippie New Age masters, but also of young people cranking out hymns of the generation using synthesizers and rediscovering psychedelia through the use of walls of guitar and vocals distortion. R. channels these sentiments through triumphant hymns with a certain bedroom pop sensitivity – though most tracks are light-hearted and somewhat nostalgic (but then again, what music referring to the previous decades can’t be described as nostalgic?), the tape tends to hit more “far out” moments, like the drifting “Nightship”, closer to Jeff’s work as Sky Stadium than the pop miniatures of the rest of the album, or the cheesily creepy “The Haunters”, which takes numerous cues from old (by old I mean the 80’s/early 90’s) video game soundtracks, bringing images of pixelated monsters and simple graphics.
Universal is one of numerous examples that the tape scene is slowly getting fed up on analog drone and moving in new directions; whether it’s the simple pop format or the minimal techno structures, it’s a sign that (to paraphrase Enfer Boreal’s album name) drone is dead (or dying) and it’s simply time to move on and explore new territories.

Purchase from Lava Church Records.
Stream on Bandcamp.
Posted by Unknown at 12:39 AM

Nice article, thanks for sharing.

hey jakub, didn't you say you wouldn't post bands proposing only a share/embbed option on their bandcamp ? Tile's music is cool, but they DON'T allow people to download their music

I'm sure the music will eventually be up for download. But maybe the dude is waiting for the label to sell the 30 copies beore doing so...need to help the labels.

Anon, I don't think Jeff would mind me uploading the cassette rip to Mediafire. I can rip and upload it today or tomorrow. :)