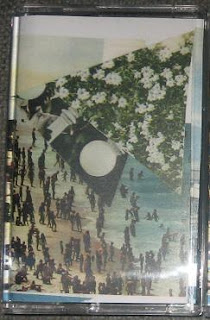 The great music completist Piero Scaruffi once divided the freak folkers (or New Weird Americans, if you please) into the „bards”, who focus on the song format and keep their songs short and melodic and the „trippers”, who focus on free improvisation, keeping their tracks long, flowing and usually formless. The two albums I’m going to review here represent both schools, both in imagery and the way they present the psychedelic aspect of their music. One is a vinyl LP from a Chicago based duo Laughing Eye Weeping Eye entitled Where Snakes & Seers Go. The other (the „tripper” mindset) is a Split cassette between Australian psychotic folk collectiva 6majik9 and ingeniously named Prehistoric Fuckin’ Morons (best name for a band of 2011, right after Reincarnated as a Burger).
The first of the two is the Illinois duo Laughing Eye, Weeping Eye. It appears that LEWE are trying to fill (whether intentionally or unintentionally, this remains to be unsolved) every freak folk/New Weird America cliche in the book. Whether it's the flashy, gender-confusing outfits or child-like (or maybe childish-like?) „psychedelic” album covers with colorful dragons and mysterious half-human, half-angel entities, Laughing Eye, Weeping Eye closely resemble the „bard” format classics such as Devendra Banhart or CocoRosie. The music on the purple vinyl revolves around vocal experimentation and attempting various moods with mostly the use of vocals and a wide variety of traditional instruments: harmonium, violins, accordions etc. etc. The album is neatly divided into 4-5 minute long songs, usually based around a simple line repeated in a hypnotic, whimsical manner. Despite the simple, pastoral feel of most songs, the music can get quite epic, with heavy brass sections and abrasive harmonium. Most of the time though, the music stays on the gentle side and focuses on kaleidoscopically different ways of delivery: at one moment LEWE sounds like a royal choir, moments later they sound like cute little furry animals inviting us to play in a rainbow meadowland.
In the completely different camp are two Australian units, who share the same tape in one lengthy outsider clatter jamming. On side A, 6majik9 offers three tracks (which blend into each other without much notice from the listener, really) of anarchic, communal kraut-folk noodling not unlike the more free improv-leaning moments of Sunburned Hand of the Man or early Amon Duul. Despite the general lack of direction and the band just playing around with a shapeless mass of sound, there are moments where the musicians get a general grasp of things and randomly create something that would serve as a rough draft for a polished, organized album: a math rock-y beat here, a few interesting guitar licks there… It’s just that the music never strays from the “jamming for the sake of jamming” territory. But it’s not like 6majik9 ever wanted to make an album of regular songs. That’s what bards are for. Side B is taken by another Australian weirdo collective Prehistoric Fuckin’ Morons. These dudes appear to be more into tape experiments and musique concrete rather than freewheelin’ bastard folk and fill the majority of their side with strange, mangled samples and cut-up experiments in the style of 80’s era Negativland. By blending found sounds with rudimentary electronics and mapless psych folk, Prehistoric Fuckin’ Morons come off as some strange love-child of Excepter, No Neck Blues Band and Delia Derbyshire.
Both releases show the basic rules and ideologies behind the two “schools” of psychedelic folk revival: on one side we have Laughing Eye Weeping Eye’s cheerful, simple freak folk that wouldn’t mind if someone called them “pop” or “psychedelic pop” – colorful, positive and energetic, even if a bit immature and childish. The split cassette is the polar opposite – anarchic clatter that tries to distance itself from pop as far as possible, preferring to stay in the air of mystery and release their albums only to a close-knit circle of freaks on out-of-date formats.