A photograph of Macchu Picchu adorns the cover of Mohave Triangles' newest cassette, and it's not just aesthetics. The artwork of Robert Thompson's newest album (released on Georgia's killer Hooker Vision label) goes beyond being merely a "old NatGeo pictures collage" to become a true reflection of Robert's inspirations behind his music. Imagery of old, forgotten civilizations from both North and South America (before the Europeans came), shamanism and the temptation of believing those civilizations had actual contact with extraterrestial beings is a staple of Mohave Triangles. On Eternal Light of the Desert Plateaus, Thompson stays in the drone area, but doesn't limit himself to drone only. Both sides of the cassette begin with a cavernous, almost dark-ambient passages, but gradually transform into windswept, scorched guitar invocations somewhere between the desert doom of Barn Owl and folky primitivism of Six Organs of Admittance (sans the vocals). It's great to see the scene's up-and-coming artists evolving beyond the area of pure drone, which, let's face it, is slowly beginning to eat its own tail. Recommended. Cassette version available at Hooker Vision. 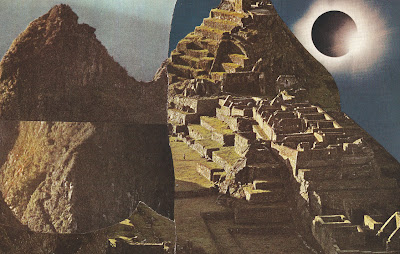 Eternal Light of the Desert Plateaus
Posted by Unknown at 5:19 PM