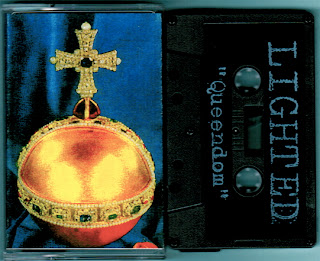 The description of the newest Lighted cassette on Lighten Up Sounds’ website is a bit confusing: it gives an impression that the music inside is chaotic, brutal, noisy and ultra-distorted. It is only partially true, however. The music on Queendom is energetic, wild and jam-tastic, but it barely ever strays from the set boundaries and rarely delves into disorder. This c-25 is the second release from this Minneapolis based trio of John Marks, Jason Millard and Patrick Benjamin, following their debut tape Kingdom, released on their own Centuries of Decay Tapes in 2010.
Side A’s opener “Ascent of Mountain With Sword” sets a stonery, vintage vibe with an infectious electric organ hook and steady, heavy drumming. The droning guitar joins forces with droning old-school electronics and occasional washes of white noise to create a heady, space-ish atmosphere of something between very early Kraftwerk (with the Neu! dudes still on the team) and the golden era of Hawkwind. The second track, “Non-Traditional Wounds” hits a more dynamic, faster and slightly more aggressive krauty territory with relentlessly pulsing synthesizer setting pace, like a group of bearded bikers riding on a clean, polished autobahn. Interestingly, the electric guitar doesn’t seem to be the center of most pieces, like we’re used to in most psychedelic rock. Instead, most of the time the guitar stays in the background, droning and squealing while the synthesizers take the spotlight, hissing, crackling and making all sorts of high-pitched noises.
On the flipside, “Morning Miami Mega” slows down the pace, with rhythmic synthesizer allowing the guitar to take control again, changing between improvised, relaxed, psychedelic noodling in the style of Sunburned Hand of the Man circa Headdress and heavy, wah-wah soaked bursts of weedian wisdom while the drums spit out series of breaks and metronome-like cymbal crashes. The finishing jam “Milk Glass Plateau” again takes a more Hawkwind-worship way, with abrasive synth likening itself to a launch pad alarm and distorted guitar soaring to almost cosmic levels. Correspondingly to the second track on previous side of the cassette, the ending piece is heavier and faster while still staying short (at nearly 8 minutes long) – like a condensed form of a lengthy spacerock jam, neatly packing 20 or 30 minutes of synth-drum-guitar madness into 8 while retaining all the elements and phases, including the atmospheric intro, the middle “freak out” part and the ending calmness.

Lighted - Queendom
The tape is available at the Lighten Up Sounds website.
Posted by Unknown at 6:55 PM