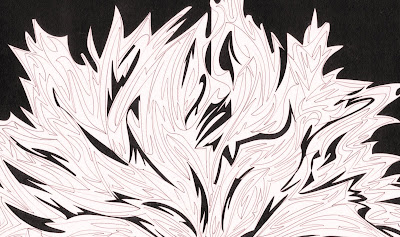 Californian-born, Portland-based label Stunned Records has been specializing in an extraordinary kind of psychedelia. Stunned often explored the outer limits of psych and music in general, creating meticulously arranged, multi-layered, droning pieces of music that could last up to 45 minutes (or maybe even longer, you never know what you expect from those sonic shamans. Stunned Records was founded by Phil French (1/2 of ambient duo Super Minerals, one of the members of Magic Lantern and the man behind minimalist piano project Eureka) and Myste French, who joins Phil on the Nite Lite project.
Nite Lite is a dense, cluttered collage of various field recordings collected from various places. The recordings are interrupted by vaguely tropical folk music or more European, traditional feeling interludes which last for 2 or 3 minutes. They’re short, but they definitely can serve as some sort of an instrumental, musical ending for every “movement” consisting purely of field recordings. The recordings are mixed with each other, many layers of different recordings are placed one upon another, the result being intricate sonic tapestries, reflecting various moods rather than places. It says on the j-card that the whole material was recorded in Cascadia, but it might seem it could have been as well recorded in Europe (the traditional folky pieces) or even on some remote tropical island or in an African country (the few tropical-ish shorties).
The connection between the snippets of the music and the recordings is similar to the creative method of Loren Chasse, especially his Of project. But Nite Lite is apparently more civilized, instead of Chasse’s purely natural, primeval sound, Phil & Myste present a civilized version. There are processed sounds of kids playing on some playground, the voiced lowered so it might almost appear the recording took place in some mutant town, where the normal humans have been replaced with weird zombie-like creatures. But apart from the moments of weirdness, there are moments of sheer beauty: the choral magnificence of “Swenson” or the tropical bliss of “Cajón”. But what remains in every single piece on this cassette is the sound of birds: birds chirp and sing on every track and they’re even in the album artwork, adorning the cassette (the artwork was done by Phil French himself).
Nite Lite’s Marlene is a truly wonderful and exploratory journey into the field recording headspace – creating a soundtrack to an invisible movie (that never was). Highly recommended, even if it cannot be listened at anytime. Listening to this needs some free time and focus.
Nite Lite - Marlene
Link via The Radiant Now
Posted by Unknown at 4:40 PM