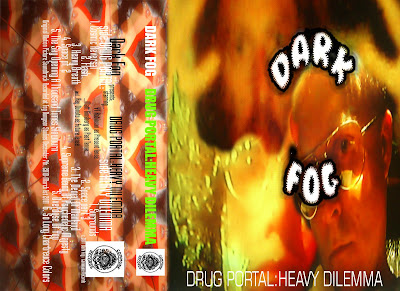 When one of your band members shares their second name with one of the greatest Beat poets, you're in for a nice psychedelic ride. Dark Fog is a Chicago based trio of oldschool psych shredders who have no problems with creating extended lysergic jamzzz or cranking out catchy garage-y tunes. Mysteriously stating the band members YT Robinson, Matt Ginsberg and Ray Donato as Present Tense, Past Tense and Future Tense, the band adopts the role of a time machine, looking into the heydays of acid rock in the 1960's and adding modern elements like ambiental, Windy & Carl style post-rock miniatures into the mix ("Space Part 2").
Though most of the cassette space here is taken by Haight-Ashbury-ish guitar freak-outs, there are certain parts which have an almost poppy feeling – short outbursts of sheer songwriting power so full of hooks it could make any aspiring garage rock/punk band blush, like the slightly over 2 minute song “Flash”, which punches its way straight into your brain and stays there for days, weeks even. Sometimes Dark Fog will reach more funky, sweaty moments (“Heavy Breath”, like the name suggests, evokes an image (or a “mind Polaroid”) of a seedy, underground bar where some hellish Hippies are jamming hard after ingesting God knows how many drugs). There is a plenty of drug references in this cassette: starting with the front cover, featuring a still from Terry Gilliam’s “Fear and Loathing in Las Vegas”, starring Johny Depp as Hunter S. Thompson to the titles – after all, one entire side of the cassette is titled Drug Portal.
Although the tape was recorded in the studio in a relatively short period of time (Dec 2010 – Mar 2011), the sound of the tracks make it seem it was collected from various soundboards from live performances recorded over a few years. This adds a sense of variety and gives different “moods” – one can almost imagine when listening to the tracks what kind of a venue could be perfect for the currently playing jam. There seems to be an intentional inconsistency in track editing – some track begin and end abruptly, as if the recording process started way into a track. This gives even more authenticity to the track, reminding the listener of the “only fragments” policy of bands like Sunburned Hand of the Man or Parson Sound. The tracks often gain a frenetic pace over a course of a few minutes, achieving a krautrock-ish, motorik sensitivity (“The Denial of Manking”, sounding like Americanized Baby Grandmothers).
If you’re into more-or-less classic psychedelic sound, with certain poppy hooks but not without a certain degree of freedom and even moments of pure hallucinogenic madness, then Dark Fog’s Drug Portal: Heavy Dilema is a tape for you. There is just a suitable amount of “drug” and “heavy”, being intense without ever becoming too intense. A perfect album for those evenings when you just can’t take a continuous one hour jam with Acid Mothers Temple or can’t stand the monolithic guitar carnage of Fushitsusha. Psychedelic rock with a human side.

Stream the tape on Bandcamp.
Buy the tape from Commune Records.
Posted by Unknown at 10:52 PM

thanks for the love, yt.