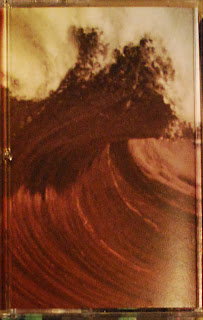 Red Electric Rainbow’s Daniel Smith is a man of simplicity. Unlike many of his contemporaries, he does not settle for intricate synth overkills (case in point: latest Emeralds), instead choosing often the most basic elements possible and gradually working his way with them. For Surfing the Breaks, his latest cassette released on Chicago label GoldTimers Tapes, Smith chose two simple sequences, which fill both sides and constitute the foundation for all the other sounds.
Side A, “Surfing the Breaks” is based on a slow sequence, which echoes and bounces back and forth with a bassy drone building in the background while exploding in slow-motion with shimmering synth tones, building walls upon walls of piercing (yet pleasant) electronic sounds with a bitchin’ synth solo lurking behind the pulsations. The whole thing sounds a bit like a guitar-less Sunroof! at their most trippy or de-technified Astral Social Club. The idea of working with a simple sequence by playing around with effects is very similar to his own Fluorescend Landscapes series.
Side B, “Water Acrobatics” follows the same formula, modifying the skeletal sequence and making it more and more psychedelic, adding echoes and turning knobs like a madman without losing the lush, relaxing quality of the music. Side B is also more restrained than side A, offering a rest from the multi-layered nirvana of the first side. As the name of the album, the tracks and the cover suggest, the theme revolves around the ocean and the aquatic adventures. But don’t expect any of the murkiness and lo-fi quality of Dolphins Into the Future or Super Minerals. Surfing the Breaks is crystal clear, like a crisp, cool wind blowing in the face, or like ocean spray spreading in the morning air.
What I really like about Red Electric Rainbow, especially Daniel’s latest albums, is his attention to detail and clear production. This sets him apart from many of the “psychedelic drone” artists who release their stuff on cassettes, with whom RER gets often lumped in. There is no murkiness, no smokey, suffocating quality to his music. Listening to the clear and polished production on Daniel’s albums is like getting high on clean air alone – taking a deep breath and feeling different and better, but without the munchies and clouded judgement.
Here's the ripped tape, since the original tape is already sold out:


And here's the rip of Come and Melt Your Face Off I've reviewed a while back. Great and underappreciated tape, it's still available on Sacred Phrases. I hope that after hearing the mp3's you'll feel the need to buy the tape. :)


Red Electric Rainbow - Come and Melt Your Face Off
Posted by Unknown at 5:41 PM

not just anybody said...

Hey this is incredibly awesome
Thank you
Do you happen to have his "Boredom in Paradise" release?
I can't find it anywhere!!!

Hi weed! Could you re-up this rare cassette?