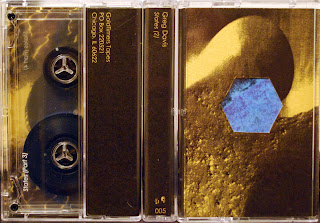 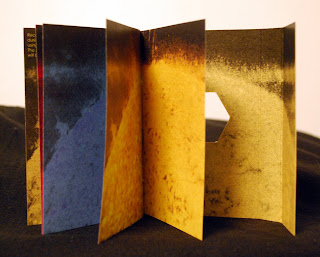 It appears that with the shift to the more vintage cassette format the synthesizer veterans also shifted to the more vintage (or maybe more “raw” and experimental) approach to their music. While Keith Fullerton Whitman, who was creating sweeping ambient vistas for CD’s, switched to experiments with algorithms and removing the human factor from the creation of music altogether with his Generator cassette series, Greg Davis moved from his trademark laptop glitch folk to New Age suites and abrasive, abstract improvisations in the style of earliest electronic champions. Old-timer music in the times of the old-timer format? It appears so.
States (2), one of the first cassettes released on Chicago’s GoldTimers Tapes label continues the path of bleeps-and-bloops odyssey witnessed on his Eyebright tape I’ve reviewed a while back. But while on that album side B offered a rest from the somewhat brutal noise assaults with a lengthy dream zone, States (2) is a full-blast excursion into 40 minutes of angular, brutalist improvs. The sound crackles, hisses, whirrs, rises and falls in a series of rage fits, like a ferocious little animal trapped and trying to fight its way out of the cage while taking short breaks to rest and gain some more energy for another attack. Side B begins like a bastardization of Eyebright dreamzone, attacking the eardrums with a relentless, harsh, monolithic drone which later disintegrates into scattered and disorganized signals. The whole cassette is filled to the brim with such conflicts. The dissonance reigns, the synths are frying (or are already fried) and there’s no remedy and not a slightest trace of melody in sight. Pure chaos.
States (2) is a very adventurous tape. Definitely not for falling asleep (unless you like falling asleep to the soundtrack set to a micro-war of little furry animals or robots inside a concrete bunker), but a nice change from all the melodic, structured albums out there. Greg Davis seems to be taking our fear of chaos and dissonance and stuffing it in our faces over and over again.
Download link removed on request by Greg Davis.
Posted by Unknown at 12:08 AM

hey there, can you please remove the download link here?
thanks, greg davis