...more like Holy McFuck! This mysterious Brit released three full albums and one EP in his career and we're dealing with some heavy psychedelic droning doomness with a tinge of ambience here and there. Collecting Earthquakes (recorded with Stephen O'Malley himself) and Smashed Amps & Sunn Guitars are lengthy excursions somewhere between Sunn O))), early Earth, Shit & Shine at its most minimal. Raw Power Suite is a fuzzed-out, wah-wahed and totally distorted tribute to Stooges' legendary Raw Pawer. Highly fucking recommended, especially, Collecting Earthquakes. I've still yet to find Burning Holy Rome, I guess I'm gonna simply buy it at the guy's official store. 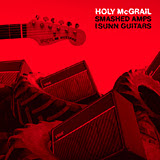 Raw Power Suite
Posted by Unknown at 12:13 AM

Raw Power Suite is the jam

Thank you for your very nice article, do not forget to read my articles also hadirkanlah l Kata Kata Cinta l Foto Artis Korea l Kata Kata Galau l wallpaper keren and many other interesting articles on my blog that.